Unprecedented Wildfires: How to Underwrite the New Normal 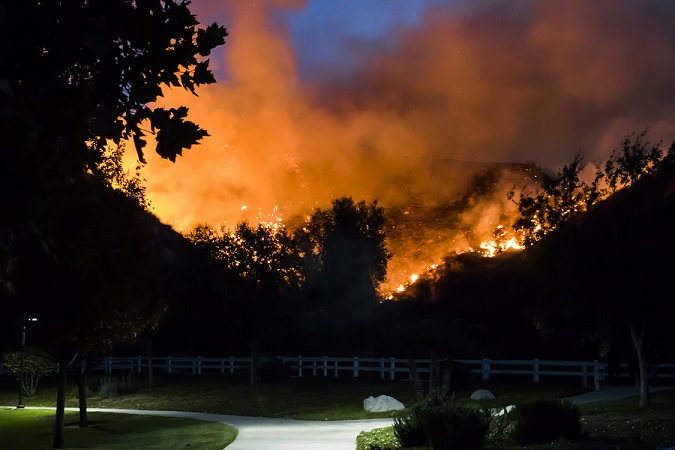 So, what can be done? How is the industry responding? Let’s dig in.

The risk is growing

If you look at the Insurance Information Institute’s graph of acres burned since 1980 to 2018, you’ll see plenty of dips and spikes … but you’ll also see a broad upward trend.

For California, the last two years were particularly painful: in 2017 and 2018, the state sustained “more wildfire-related property damage than … in any [other] two consecutive years of its history,” said Don Jergler at Insurance Journal.

Impressive: but is it a fluke? After all, two consecutive years do not make a very long graph. Yet the answer is no. According to a recent report on the observed impacts of anthropogenic climate change, Jergler said, California has “experienced a five-fold increase in annual burned area from 1972 to 2018.” That’s over four decades of data. Moreover, recent losses have been so severe, they’ve moved “outside the market understanding of the risk.”

The duration of risk is getting longer, too. According to NASA data, the wildfire season has “lengthened across a quarter of the world’s vegetated surface” since the 1980s, such that “in some places like California, fire has become nearly a year-round risk.”

According to the Insurance Information Institute, insured losses from United States wildfires were close to zero in 2009. There followed a few spikes in 2011, 2015 and 2016, running somewhere around $1M or less annually, but in 2017, losses skyrocketed to nearly $15B (in insured losses alone). In 2018, that number was over $18B.

Indeed, wildfires, along with flash floods and hailstorms, “have become increasingly costly for the industry, even though they were traditionally seen as lesser risks and classed by some insurers as ‘secondary perils,'” said Lena Masri at Insurance Journal.

In fact, according to a Reuters analysis, between 2010 and 2018, the average insured losses from said “secondary perils” nearly doubled those from primary ones, like earthquakes and hurricanes, Masri said.

How are insurers responding to the risk?

There is no coherent response at present, because the problem is new enough to raise unfamiliar questions on every front.

Perhaps the clearest example can be found in the use of algorithmic models, about which insurers and consumer advocates are “at odds,” according to Nicole Friedman at The Wall Street Journal. “Insurers have long used these models to project losses from natural disasters but insurers, homeowners and regulators disagree on how they should be applied to assess California’s wildfire risk.”

So-called “random” events such as wildfires can be “very difficult to model,” Masri said, quoting Andrew Horton of Beazley, because “no one has done it before.” Risk modeling is typically performed after loss, and it “can be hard to convince the insurance sector” to do it in advance.

Not all insurers are hesitant, however. Last year Allianz Re started developing an “interactive hazard map” which will track wildfires as well as “floods, tornadoes, hail, earthquakes, tropical and extra-tropical storms,” Masri said. This system, to be launched before the year is out, will help Allianz underwriters assess wildfire risk anywhere in the world.

Are they responding fast enough?

For many residents of Northern California, any progress is too slow.

This month, the bankrupt utility company PG&E shut off power to many cities, stating a wildfire concern due to wind. “After being forced into bankruptcy from wildfires its equipment caused over the past two years,” said Mark Chediak and David R. Baker at Carrier Management, the utility cut power to approximately 750,000 homes and businesses: being “the largest intentional blackout ever orchestrated in the state,” with an economic impact that “may reach $2.6 billion.”

The human impact, while harder to quantify, is also significant. “Few understood what the challenges would be until they were in the dark: a mom who couldn’t refill her son’s medication for bipolar disorder; a man with schizophrenia who couldn’t quiet the voices in his head without the television on; the people on dialysis who had to travel to another town,” said Anita Chabria and Taryn Luna at Los Angeles Times.

As wildfire season continues to grow – and risks and losses with it – insurers will need to take actions and form partnerships to mitigate the impacts.