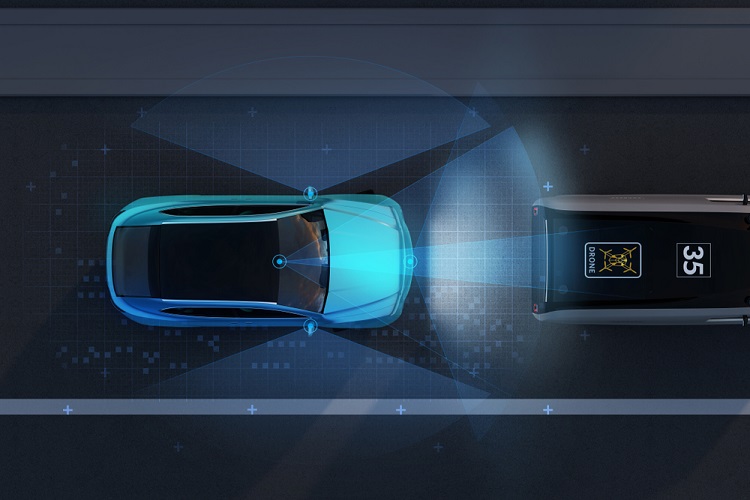 In days gone by, if you drove your ’79 Ford Bronco into a lamp post, the fix was simple. Replace the headlamp, repair the fender. These days, not so much.

“Making a robot that perceives its surroundings — not just spotting that lumpy mass but understanding it’s a child … is the main challenge of this young industry,” said Alex Davies at Wired Magazine. “Get the thing to understand what’s going on around it as well as humans do, and the process of deciding how to apply the throttle, brake, and steering becomes something like easy.”

For every engineer working on that problem, there’s a different way to approach it — but generally speaking, they’re all working with three basic tools.

Radar uses radio waves to detect and localize objects, and it “rides behind the car’s sheet metal,” said Davies. According to Gert Rudolph at Sensors Online, radar sensors “are placed at each corner of the vehicle,” with “a forward-looking sensor for long range detection … on the front” and possibly some more sensors “on each side mid-body.”

Cameras provide video imaging for the driver, equip self-driving cars to detect and classify objects, and gauge the distance between object and vehicle. Multiple cameras are installed on cars with advanced driver assistance systems (ADAS), and they’re located on all sides of the vehicle.

Lidar, finally, is a technology that works like echolocation, but it uses light instead of sound. Remember how bats navigate at night? They make high-pitched noises and use the echoes to locate obstacles. Lidar, likewise, sends out laser light and measures the pulses that are reflected back. The technology is young, and therefore expensive, and of course, it’s located at the exterior surfaces of the car.

Have you noticed a common theme with all of these technologies? They’re located on the outside of the car. Where they’re going to get smashed, if the car happens to knock into anything.

Theoretically, ADAS makes one’s vehicle safer: they can prevent collisions by removing human error. “Cutting out the human error that causes 90 percent of crashes could start to save some of the 35,000 lives lost on American roads every year,” said Jack Stewart at Wired.

On the other hand, when collisions do take place, the same technologies make a car far more vulnerable to costly damages. That’s what AAA found this October, when the organization “conducted a study … to better understand the costs of replacing and/or calibrating ADAS sensors in typical collision and repair scenarios.”

You can download the Fact Sheet here. But long story short, the sophisticated sensors on the vehicles that AAA studied — a top-selling SUV, sedan, and pickup — can cost twice as much to repair as their non-ADAS counterparts.

Add to that, the sensors are located in places particularly susceptible to damage during a minor kerfuffle: the windshield, bumpers, side mirrors, and bodywork. It doesn’t take a collision with another vehicle to damage them, either. These areas can take a hit when pulling out of a garage or bumping into a mailbox.

In the words of Denny Jacob at Property Casualty 360, “Even minor incidents that cause damage to this technology … can add up to $3,000 in extra repair accosts.”

That’s why AAA is advising consumers to take a close look at their insurance policies “and consider the potential repair costs of these advanced systems.” But it would be a mistake to suppose that these costs were only impacting consumers. They’re driving up claims costs for insurers, too.

According to a report published last spring by the Insurance Information Institute, loss ratios have been rising for a decade — “dramatically” so between 2015 and 2017. That’s because severity has spiked, thanks in part to a rise in repair costs.

Buckle up, because chances are, we won’t be backing up. Manufacturers and their tech partners are racing to develop and refine ADAS, and they are focused on vehicle performance and driver safety, not lower claims costs. It one more way that auto insurers will have to choose between a slow death or successful adaptation.

Need a policy administration system that can take you to the future? That’s Silvervine. Request a demo to see it in action.