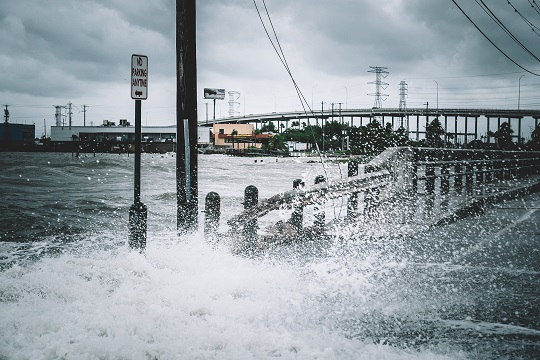 Ten years after Hurricane Andrew “tore a swath of destruction through Florida” in the early nineties, Sandy Smith at EHS speculated that if a category 5 hurricane were to hit Florida in 2002, the costs at that time would measure twice as high – from Andrew’s $15.5 billion to a projected $30 billion.

Not just due to inflation, either. The region would be more vulnerable, Smith said, because of how great its population and wealth had grown in the years since Andrew came and went.

Now 26 years after Andrew, Hurricane Irma has made the Smith’s hypothetical real. And the costs that Smith predicted are modest compared to what we’re seeing in Florida today. Recent estimates put the damages from Irma somewhere between $50-150 billion, according to the BBC.

Meanwhile in Texas, there’s Hurricane Harvey, which could cost up to $180 billion all on its own.

Two major hurricanes hitting the United States at almost the same moment is, quite literally, a perfect storm. “But to dismiss this as a once-in-a-lifetime event would be a mistake,” said social scientist Mikhail Chester and engineer Thaddeus Miller at The Conversation. “With more very powerful storms forming in the Atlantic this hurricane season, we should know better.”

In fact, the Atlantic reported that we may be looking at a new normal for tropical storms. Some climate scientists theorize that hurricanes “are getting more intense overall,” while “weaker storms are also forming less frequently.” If so, we’ll see storms less frequently in days to come, but they’ll be doozies.

One thing that’s not in question is our vulnerability. “We know population is increasing, and we know vulnerability is increasing because there’s no massive plan to update infrastructure in Houston,” professor of atmospheric science Katharine Hayhoe told the Atlantic. “There’s really no uncertainty that the risk is going up.”

That rise in risk is very much on the minds of Chester and Miller at the Conversation. “If we design with the technologies, needs and climate conditions of the 20th century, we will no longer serve society and the hazards we will encounter now and in the future,” they said.

Greater vulnerability raises the need for deep changes in how we as a society prepare for storms like Harvey and Irma. Where infrastructure is concerned, for example, there are serious lessons for “policymakers, planners, engineers, developers and the public,” the Conversation said.

No big changes are in the works in the insurane industry at present, however. For insurers, the situation following Harvey and Irma is “surprisingly rosy,” Fortune said. Analysts predict that “profit will take a hit, but the the dynamics of capital and pricing will not.” Yes, insurance stocks took a dive in direct response to Irma, but that reflects more on market fear than on industry capacity. Insurers can handle this one, said CNBC.

Long story short, we can expect the industry to proceed as normal for the time being. Yet if infrastructure and institutional design don’t receive some much-needed attention in years to come, that may change.

Is your insurance software system prepared to weather the changes ahead? If not, consider Silvervine Insurance Software. Download our “Losing Your Legacy” report to learn more.